Steven Doyle had a life-changing experience in 1974.

That led the 61-year-old Zionsville resident to collect more than 2,000 books and numerous pieces of Sherlock Holmes memorabilia from movies and TV shows.

Doyle, a video producer for Purdue University’s College of Agriculture, is a member of the Baker Street Irregulars, which meets once a year in New York City. Doyle, who said group has about 250 living members, became a member in 1996 and then became the publisher of its quarterly publication, The Baker Street Journal, in 2010.

The Baker Street Irregulars include actors and authors and even NBA legend Kareem Abdul-Jabbar.

Doyle also heads a group called The Illustrious Clients of Indianapolis, which meets every six weeks, with meetings often centered on a Holmes story. The annual Sherlock Holmes film festival will be held noon to 5 p.m. June 25 at the American Legion in Zionsville and will feature the film “A Study in Terror,” among others. To register for the free films or learn more, email sdoyle221@aol.com.

“It’s a delightful group of a lot of great friends,” said Marc Lehmann, who has been an Illustrious Clients member for 13 years. “Steve is the president, and he is so knowledgeable. I learn so much.”

Doyle, who has lived in Zionsville with his wife, Pam, since 1991, founded and edited a quarterly journal called The Sherlock Holmes Review in 1987, which lasted 10 years.

Doyle co-wrote “Sherlock Holmes for Dummies” with David Crowder in 2010.

Although he has much more valuable items, Doyle said his most precious books were a Christmas gift from his parents when he first became a fan. Doyle had requested the books “The Adventures of Sherlock Holmes” and “The Memoirs of Sherlock Holmes” after seeing them at a mall in South Bend.

“They are intrinsically worthless, but if there was a fire in my house, those are the two books I would grab first,” he said. “That goes to the heart of my idea of book collecting.”

Doyle shared his passion for book collecting as the first speaker May 21 in Black Dog Books’ speaker series in Zionsville.

“It’s cool to have first editions, signed volumes, but my thing as a book collector is, what is the book to you?” he said. “These books are priceless to me because of that Christmas morning when I got them.”

The first Sherlock Holmes story, “A Study in Scarlet,” was written by Arthur Conan Doyle in 1887.

“One of the first places he sent, he got a response saying, ‘We can’t possibly take this. The market is flooded with cheap fiction,’” said Doyle, who called having the same last name as the legendary author as fortuitous coincidence.

“The editor ran up to the owner and told him, ‘This is the greatest short story writer since (Edgar Allen) Poe,’ and I think he’s right,” Doyle said. “That’s when Sherlock Holmes became Sherlock Holmes in the public consciousness. People would line up at the books stalls when the magazine was going to be released.”

For years, Doyle would hunt for Sherlock Holmes treasures in used bookstores. Once while living in Bloomington, one of the book store owners knew he was a Holmes fan and asked if he would be interested in a complete run of The Strand Magazine.

“I was stunned,” Doyle said. “I said I would, and she said they are in that box. I remember slowly walking toward them like I’m walking toward my destiny. The issues were bound together. This is like finding the Holy Grail.”

However, the store owner said she would have to ask her husband about the price. Doyle said the husband wasn’t as generous as his wife.

“He said $250, and I knew that was the bargain of a lifetime, but that was a lot of money for us at that time,” said Doyle, who put $20 to hold and went home to convince his wife it was worth emptying the bank account to buy it.

Doyle said another great find was a “The Memoirs of Sherlock Holmes” book, published in 1892, and signed by actor William Gillette, who played Sherlock Holmes on stage and in a silent film, and other actors from stage shows. In addition, Doyle has an autographed book of Basil Rathbone’s autobiography. Rathbone portrayed Holmes in 14 movies from 1939 to 1946.

Doyle’s memorabilia includes movie posters and clothes and deerstalker hats worn by actors in the films and TV show.

“I’ve bought things that are not very expensive but to me are valuable, and vice versa,” Doyle said. “I’ve overpaid for things.”

Doyle’s other interests include classic horror and science fiction films. He also plays bass guitar in a classic rock band, The AgTones, that used to perform live, but now only plays in Doyle’s basement. 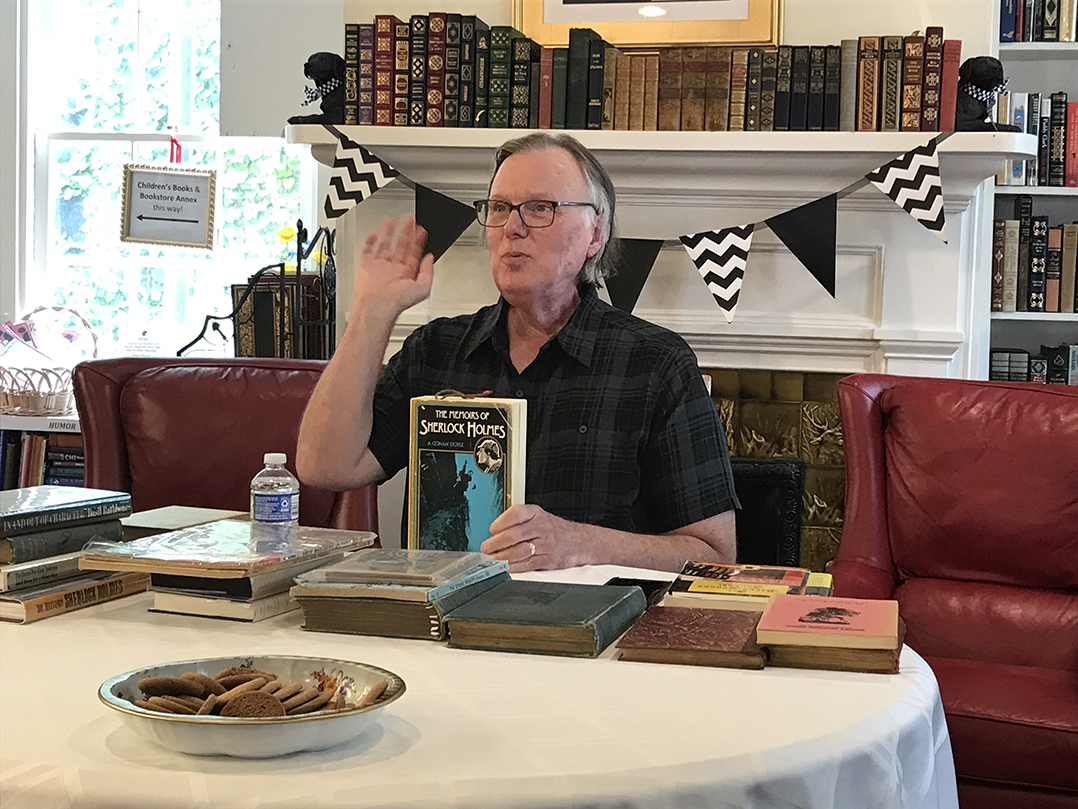 Sherlock Holmes collector Steven Doyle talks about sharing an in-person interview with the late British actor Jeremey Brett, who played Sherlock Holmes in 41 episodes for the Granada Television series from 1984 to 1994.

“I had already done a telephone interview with Jeremy Brett in 1987,” Doyle said. “He was super generous with his time.”

In 1992, Brett was touring America to record promotions for PBS stations. So, Doyle called to get an interview with Brett for The Sherlock Holmes Review.

Doyle said he played every card to get the interview in Chicago. Doyle said Brett gave him and his publishing partner, Mark Gagen, much more than the allotted 10-minute time window and clearly enjoyed his more in-depth questions than the other interviewers.