A senior member of the coalition drew outrage Tuesday after a recording surfaced of him saying he would deport all Arabs from the Holy Land if there were a magical button that could do so. Responding to the criticism, Deputy Religious Affairs Minister Matan Kahana later said his remarks had been poorly worded.

Kahana, of Prime Minister Naftali Bennett’s right-wing Yamina party, was speaking about the Israeli-Palestinian conflict on Monday at a high school in the settlement of Efrat, south of Jerusalem.

In a clip aired by the Kan public broadcaster, Kahana was seen explaining that he doesn’t believe peace with the Palestinians is possible in the near future, and that the sides will remain deadlocked.

“If there were a button you could press that would make all the Arabs disappear, that would send them on an express train to Switzerland — may they live amazing lives there, I wish them all the best in the world — I would press that button,” he said.

“There is no such button,” he continued. “Apparently we were destined to exist here [together] on this land in some form.”

Kahana — who until recently served as religious affairs minister — was also heard in the recording laying out his opposition to the two-state solution, saying the idea that it would bring peace was “nonsense” since the Palestinians “will never give up Beit Gamliel and Sheikh Munis — Tel Aviv University.” That was a reference to a Palestinian village whose residents were forced to leave in 1948, and which lay on land that today partly includes the university.

The remark was condemned by several lawmakers, including from the coalition party Ra’am, which made history last year as the first Arab party to fully join an Israeli coalition. The unlikely coalition has recently appeared closer than ever to collapse, with a handful of MKs from several parties either defecting outright or refusing to back the coalition in plenum votes.

“Matan Kahana, we are here because this is our homeland,” responded Ra’am MK Walid Taha. “You, and those who think like you, will continue to bear your frustration because we simply won’t disappear.” 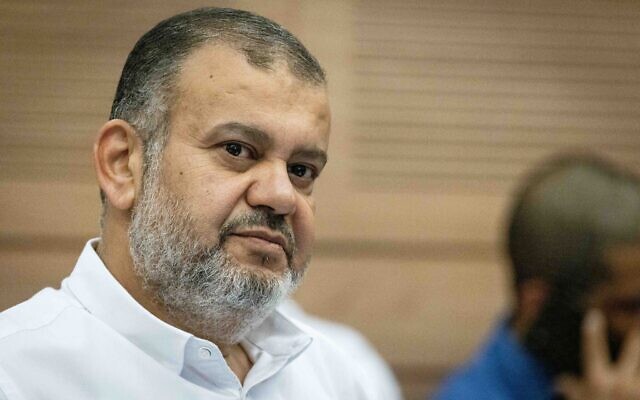 MK Ahmad Tibi, from the predominantly Arab Joint List opposition party, tweeted, “There is a button that will make you disappear from the government and from the Knesset. I will press it soon.” That was an apparent reference to the teetering coalition and to plans to present a motion to dissolve the current Knesset and call new elections.

“A miserable remark. It is a shame it was said,” he said. “The Arabs are Israeli citizens and they are here to stay. What we should do away with are bigoted remarks and opinions.”

Avidar’s party leader, Avigdor Liberman, largely based his political career for many years on anti-Arab sentiment, including saying that many Arab Israelis “will have to find another place.”

Responding to the criticism, Kahana acknowledged on Tuesday morning that he had used a “poor choice of words.”

“In a conversation I held last night with students, I repeated the obvious notion that neither us nor the Arabs are going anywhere and that’s why we need to find a way to live here together,” he tweeted. “The current government is an important step in that direction. My flow of words included some poor phrasing.”

According to Hebrew media, Kahana first called Tibi to apologize, but the latter demanded that he make his apology public and said: “There is a conflict, but I would never say Jews should be transported by trains. That’s terrible.”