Family and friends of Cooper Noriega, 19, have thanked his supporters for their outpouring of support after the TikTok influencer was found dead on Thursday.

Noriega was found dead in a mall parking lot on the 500 block of North First Street in Los Angeles just hours after posting a video about dying young.

On Sunday, in a heartbreaking tribute, Noriega’s ex girlfriend Sabrina Quesada, 20, said the influencer was ‘the best thing that ever happened to me,’ sharing a picture of them as a couple and adding ‘i’m so sorry my love. may we meet again.’

In another post, she wrote: ‘You were the biggest light in the world, anyone who met you loved you so much. you had the most contagious laugh and brightest smile. you loved me more than anyone ever has and i will never forget how that feels. i’m so lucky to have been loved by you. you deserved so much better than this. i’m so f***ing sorry.’

Quesada, an influencer herself with 4.2 million followers on TikTok and almost one million on Instagram, parted ways with Cooper after a year and a half of dating in April.

‘We pray that we all as a community can continue his legacy. He loved each and everyone of you,’ said his sister, Parker Noriega, positing on Cooper’s Instagram in a message to his fans.

‘On behalf of our family we want to thank you all for the kind words of our little coop,’ she added.

Police received a 911 call on Thursday from someone who found the young influencer unresponsive in the parking lot, TMZ reported.

The news came hours after Cooper posted a video of himself lying in bed with the caption, ‘Who else b thinking they gon die young af.’

His death is currently under investigation, according to the Los Angeles County Medical Examiner’s office. 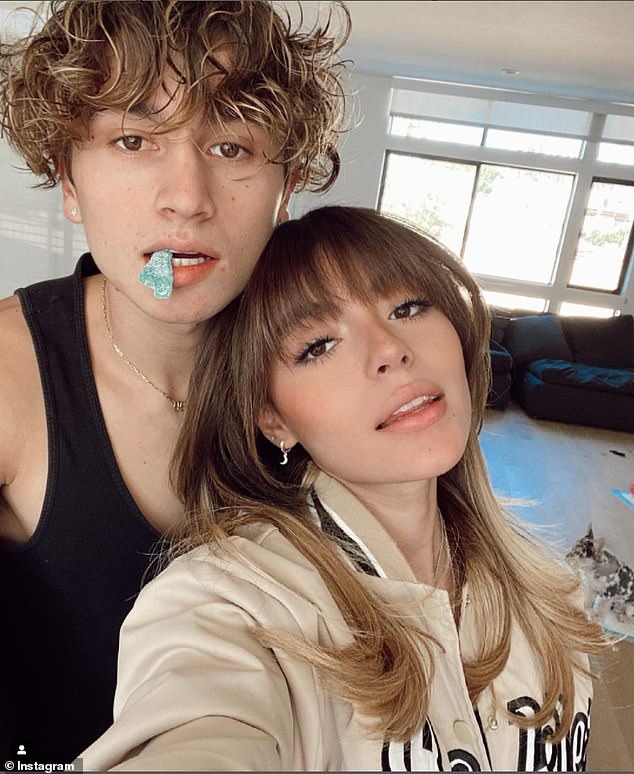 Cooper Noriega, left, is pictured with his ex Sabrina Quesada. Quesada parted ways with Cooper after a year and a half of dating in April 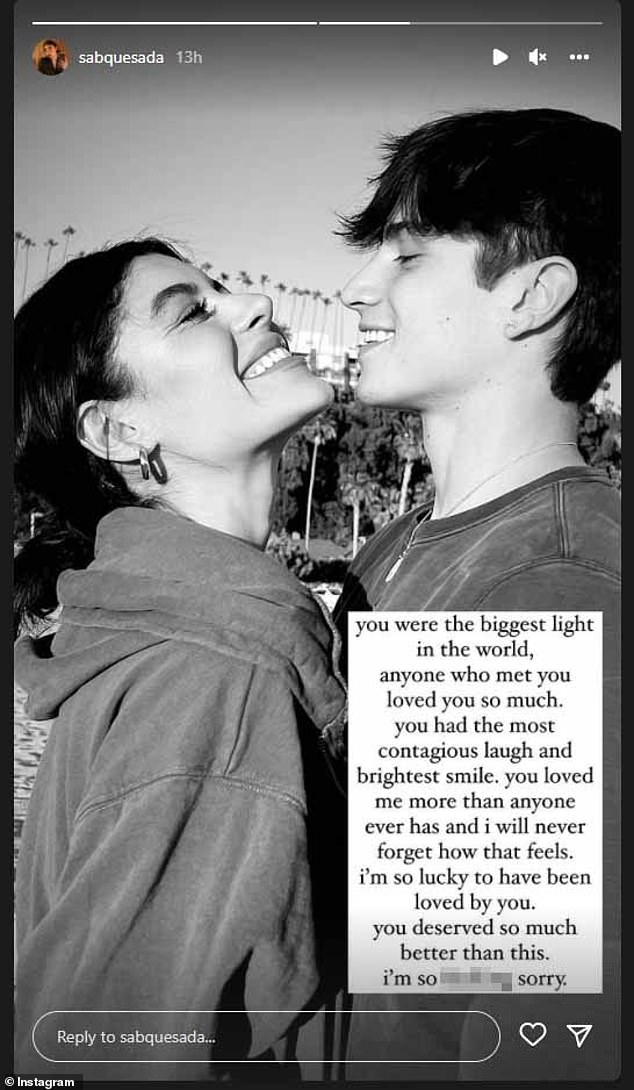 Quesada, an influencer herself with 4.2 million followers on TikTok and almost one million on Instagram, posted a tribute to her ex-lover 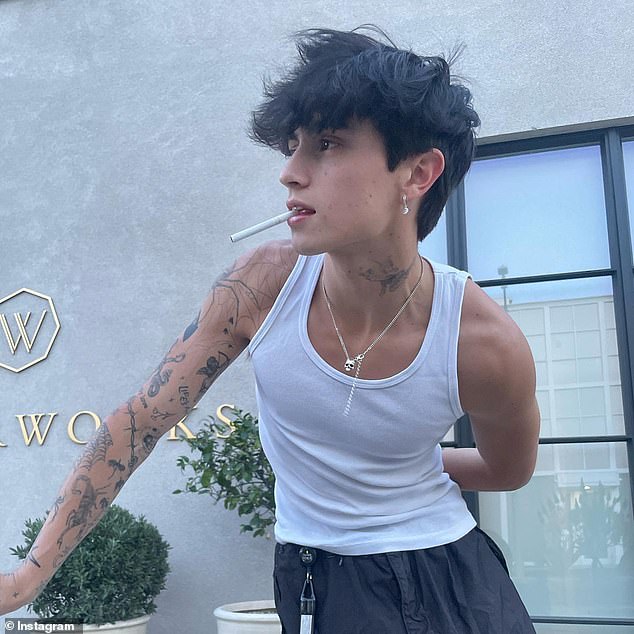 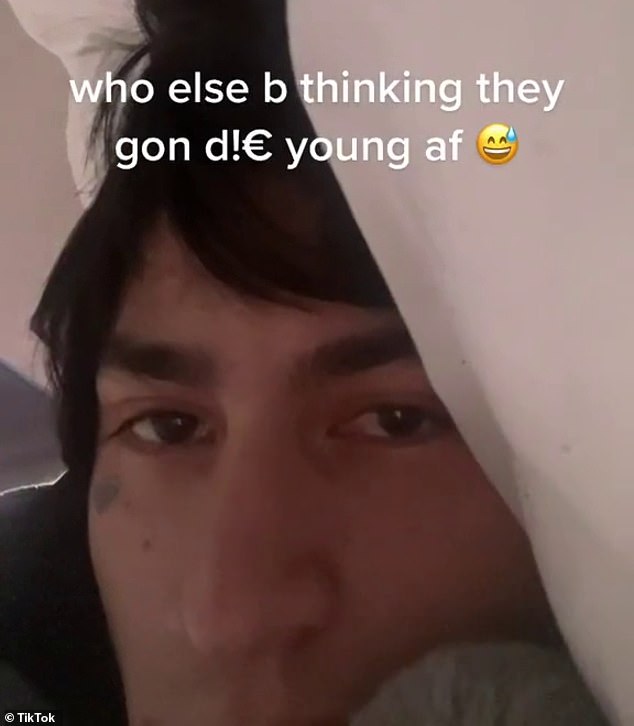 Hours before his death, he posted a video himself lying in bed with the caption, ‘Who else b thinking they gon die young af’

Sources told TMZ that Noriega was not inside a vehicle when he was found and there appeared to be no signs of trauma to his body.

Noriega had amassed 2.8 million followers on TikTok where he mainly vlogs about skateboarding, fashion and comedy. He also has 427,000 followers on Instagram, where he listed himself as a fashion model.

Just last week, he had appeared as a guest on the Barstool’s BFF’s podcast with Dave Portnoy, Josh Richards and Bri Chickenfry.

On June 5, Noriega revealed that he had started a Discord group strictly to discuss mental health.

In his bio, Noriega wrote, ‘I’ve been struggling with addiction since I was 9 years old, you may think that’s crazy but that’s the life I’ve been dealt.

Last year, Noriega celebrated getting clean after suffering what he called ‘a deadly overdose/suicide attempt’ on fentanyl in 2020 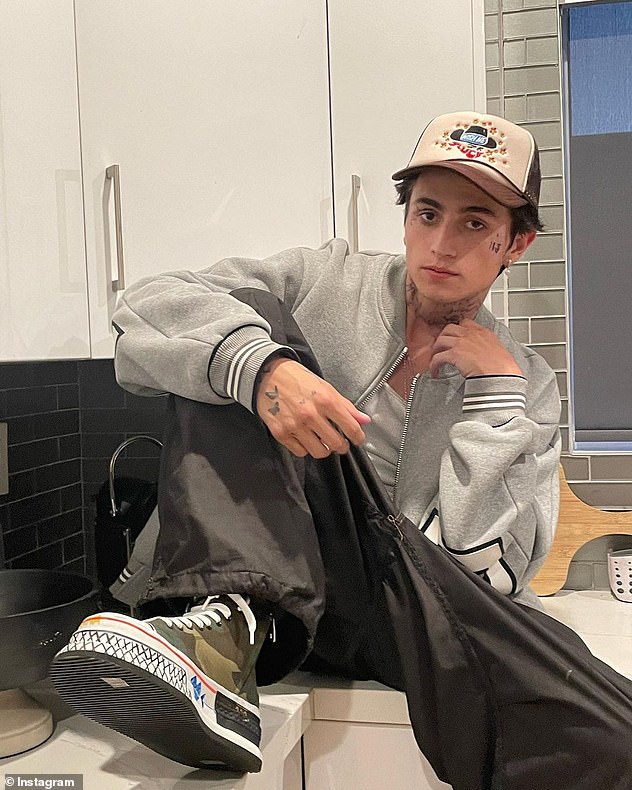 Noriega discussed his struggle with addiction and said it was his goal to open a rehab facility to help others. He’s pictured on June 5, where he shared access to his mental health Discord 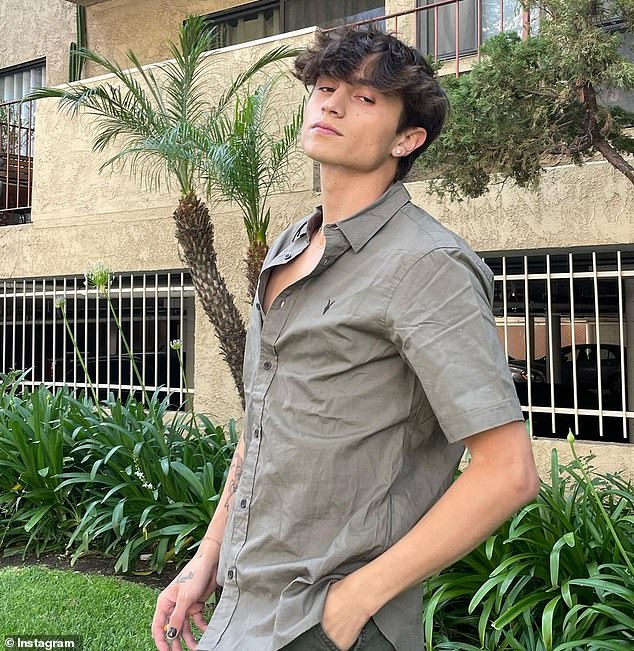 ‘I would like to use the influence I’ve been given to create a space built on spreading awareness and normalizing talking about mental illness.’

On his Discord server titled ‘Coop’s Advice’, the influencer set up a premium subscription to fund the rehab facility, with 80% going towards the project and the remaining 20% sent to mental health organisations.

‘My goal is to eventually open a rehab where people aren’t traumatized at the end of their recovery, and where the staff members are trusted people,’ he posted.

‘One of the many things I’ve learned while struggling with addiction was that surrounding yourself with negative people will only bring you down,’ Noriega wrote. ‘For that reason, Discord is meant to bring us all together and create a safe space where people can vent and help others through their tough times.’

Noriega told fans that he suffered an ‘overdose/suicide attempt’ on fentanyl in 2020, but by January 2021, he celebrated 90 days sober and committed to his vow to stay clean.

Noriega’s dad, Harold Noriega, posted on the Discord server: ‘I want to first thank each and every one of you for all of the wonderful words [and] love sent to us about our beautiful boy.

‘Coop had told us how much he wanted this Discord to be a successful place for people like him to feel safe to share their mental health concerns and find help and comfort.

‘It is our goal to continue his wish with this Discord for people to be real and find love and support here. If we can help just one, just one person make a decision in the right direction, then Coop’s dream is a success.

‘You cannot fathom how much it pains our family that Coop is no longer here and he will not be back. But with keeping his dream of this Discord safe and positive, Coop lives on. I also hope to find peace here with the loss of my little boy. I love you all. Harold.’

Many took to social media to mourn the sudden passing of the TikTok celebrity. 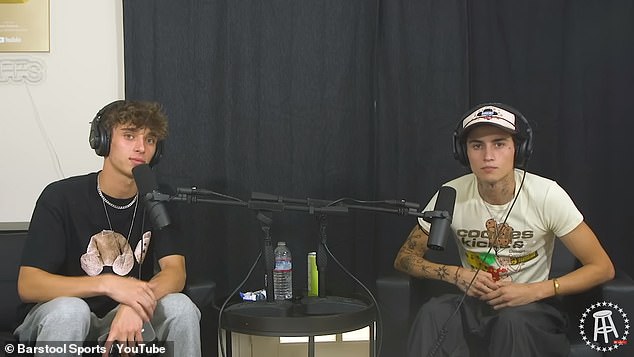 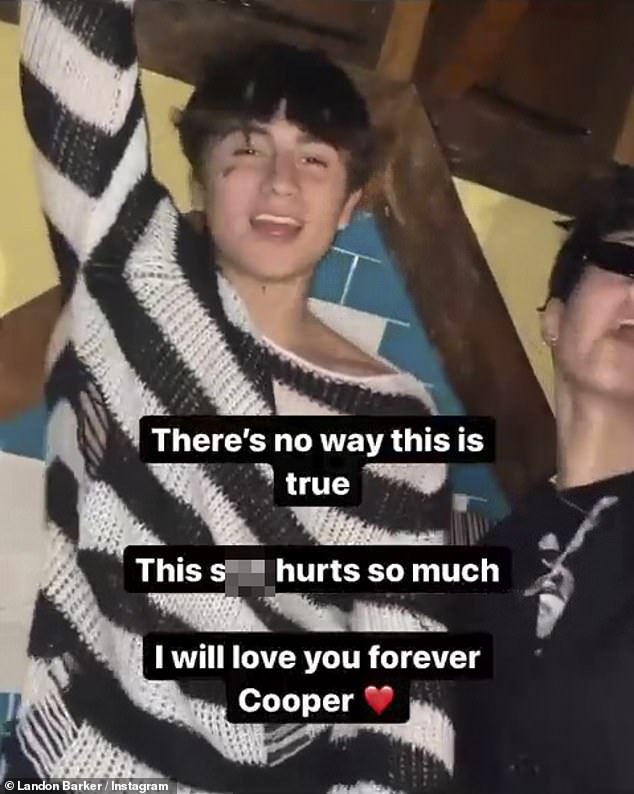 Friends on the Discord said that a GoFundMe link had yet to be posted by the family, warning fans wishing to pay tribute to Noriega against donating to potentially illegitimate accounts which had not been set up by family members

A Twitter user with the handle Bellhuddy said he was heartbroken over Noriega’s death, writing, ‘I have so much to say and at the same time I can’t say anything.

‘Cooper Noriega you will be the most beautiful star in our sky, we will never forget you thank you for being an amazing friend to jaden. We love you so much, I hope you are at peace wherever you are.’

‘The fact this was one of his last posts is so devastating, rest in peace cooper noriega,’ Rodrigo wrote.

Twitter user with the handle Roger, also mourned Noriega and said the influencer’s mental health Discord group had actually helped him with his own problems.

‘Cooper Noriega’s mental health discord helped me so much,’ Roger wrote. ‘He should’ve talked to us there we would’ve helped him right away.

‘I can’t believe this is happening this is not okay.’ 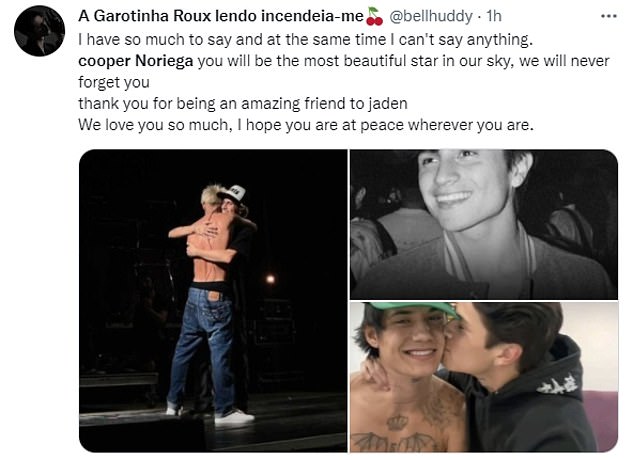 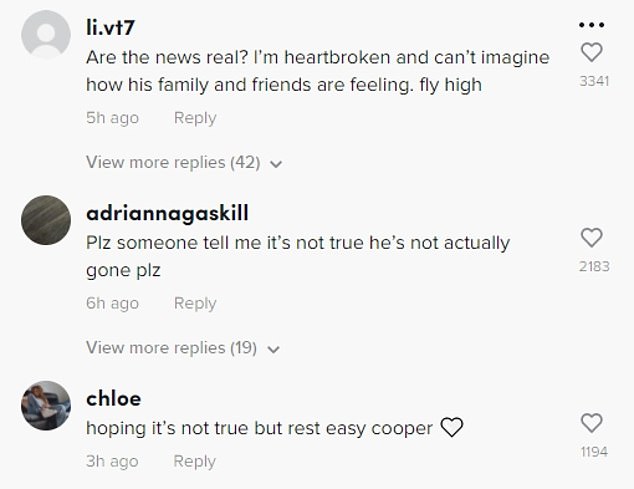 Those on Tik Tok, Noriega’s primary form of communication with fans, were in utter disbelief.

‘Are the news real? I’m heartbroken and can’t imagine how his family and friends are feeling,’ one user with the handle li.vt7 wrote. ‘Fly high.’

Another TikTok fan with the handle adriannagaskill wrote, ‘Plz someone tell me it’s not true he’s not actually gone plz.’

Consoling Cooper’s ex girlfriend, commenter Amelie Zilber said: ‘Those we love never truly leave us…There are things that death will never touch. We love you so much, Sab and are so devastated by this loss. Sending you strength and courage and light.’

Chase Keith added: ‘Love you sabby, coop is watching over you.’

Friends on the Discord said that a GoFundMe link had yet to be posted by the family, warning fans wishing to pay tribute to Noriega against donating to potentially illegitimate accounts which had not been set up by family members.

The Samaritans hotline can be called for free on 116 123, or emailed at jo@samaritans.org.