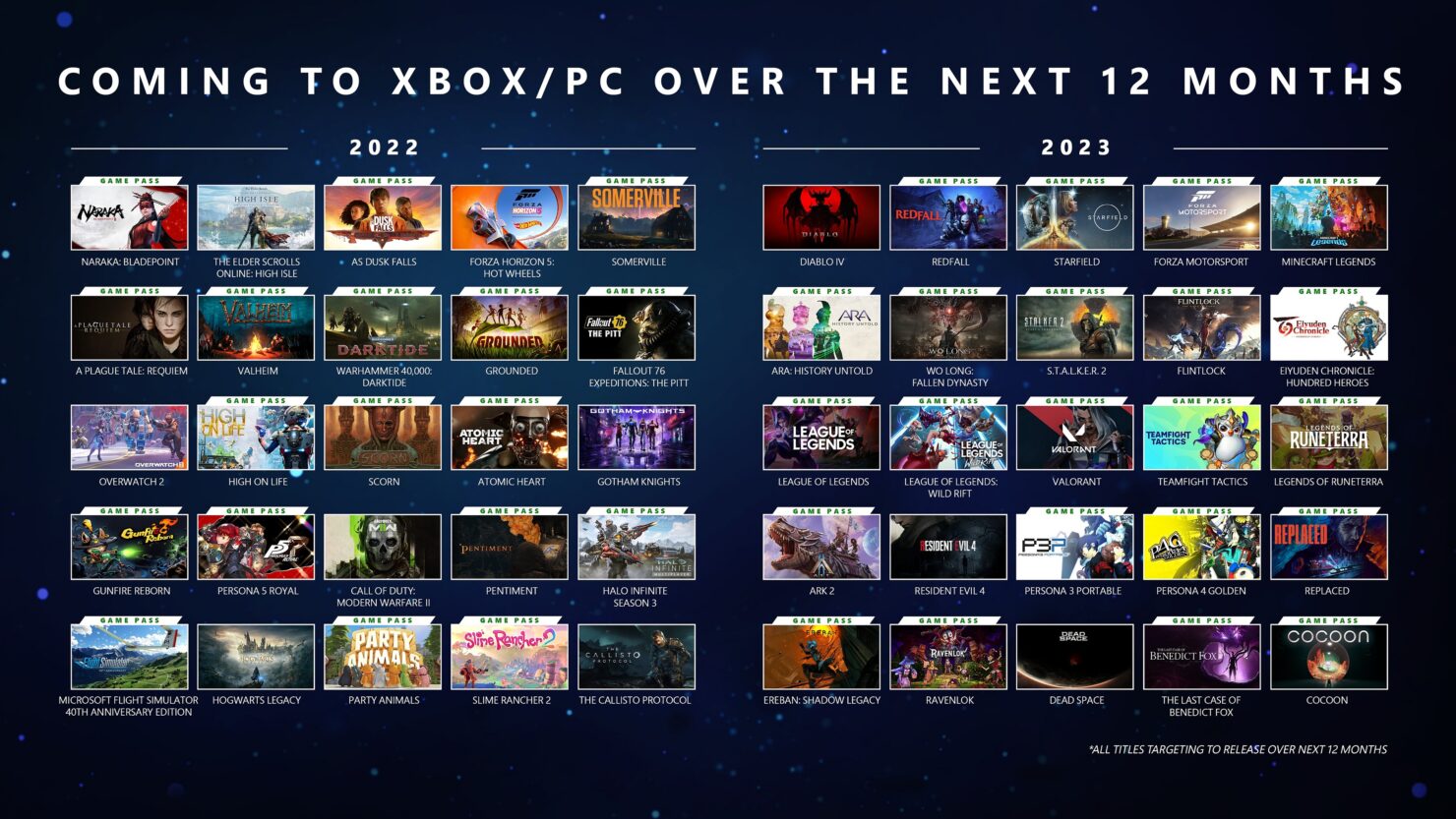 Yesterday, during the not-E3 game showcase, Microsoft shared an Xbox lineup slide of games coming to console and PC in the next twelve months, most of which will also be available on Game Pass.

This is not only informative for customers regarding what to expect; upon closer look, it may well provide us a realistic estimate on when certain games that do not yet have a release date will become available this year. That’s because all of the games in the 2022 Xbox lineup are seemingly sorted by release date. We can anchor that certainty with the many known quantities.

For instance, the first two games due to release next week (Naraka: Bladepoint on June 23rd and The Elder Scrolls Online High Isle on June 21st) are also the first games on the slide. Then there are As Dusk Falls and the Forza Horizon 5: Hot Wheels DLC, both confirmed just yesterday to be launching on the same day, July 19th.

It follows that Somerville, the debut game from independent team Jumpship, and the highly anticipated sequel A Plague Tale: Requiem from Asobo Studio are both targeting a release at some point between that date and the next known quantity on the Xbox lineup slide – Fatshark’s Warhammer 40,000: Darktide, set to debut on September 13th for PC and Xbox Series S|X. There’s another title that’s right before Darktide, and it’s Valheim from Iron Gate Studio. Of course, Valheim has been out for a long time, but this refers to its launch on the Game Pass subscription service, which should occur before mid-September according to the Xbox lineup slide.

Moving on, Obsidian’s Grounded, Bethesda Game Studios’ Fallout 76 Expeditions: The Pitt, and Blizzard’s Overwatch 2 are all correctly sorted by their respective release dates (September for the first two, and October 4th for the last one). High on Life is also confirmed to be coming in October, likely between Overwatch 2 and the next game on the Xbox lineup slide, Ebb Software’s Scorn, out on October 21st.

Then there’s Atomic Heart, the long-awaited BioShock-like immersive first-person shooter game from Russian studio Mundfish. The last official news was that the title should debut in “######ber”. Going by the slide, fans should expect it to land between October 21st and October 25th, which is the date of the next game on the image, Warner Bros. Montréal’s Gotham Knights.

Gunfire Reborn and Persona 5 Royal should both land before the end of the month, just like Call of Duty: Modern Warfare II (launching on October 28th) and Pentiment.

Halo Infinite: Season 3 and Microsoft Flight Simulator 40th Anniversary Edition are both officially targeting a November release. The next known quantity is The Callisto Protocol, confirmed to be out on December 2nd, which means that Hogwarts Legacy from Avalanche Software, Party Animals from Recreate Games, and Slime Rancher 2 from Monomi Park should be launched at some point in November.

Of course, these are all targeted release dates. Even fixed release dates can slip, as we’ve seen happening all too frequently after the pandemic, but the Xbox lineup slide gives us a good idea of when to anticipate certain game releases.

Do note that this exercise cannot be applied to the 2023 part of the slide, since it is clearly not sorted by known release dates; the Dead Space remake is set to launch on January 27th, and yet it is one of the last games on the list.