World-renowned performance artist Marina Abramović is launching her first ever NFT later this week, of The Hero (2001), one of her most personal performance pieces.

In the original piece, Abramović sat astride a white steed, bearing a white flag waving gracefully in the wind, set against an expansive landscape of trees and sky in Spain. The piece, released as a film, was a tribute to her then-recently deceased father, who was a Yugoslavian war hero during World War II.

Abramović, who was born in Belgrade, Serbia in 1946, is now revisiting that work in collaboration with The Cultural Institute of Radical Contemporary Art (CIRCA) in London. The film will be screened from June 13 to August 13 on a network of screens ranging from Piccadilly Lights in London and Times Square in New York, all the way to COEX K-Pop Square in Seoul, South Korea. 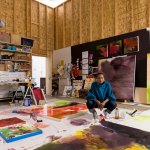 The artist has also written The Heroes’ Manifesto, a reconceptualization of her An Artist’s Life Manifesto from 2011. The new manifesto has been described as a response to the urgent need for heroism over artistry in today’s world.

Abramović’s NFT of The Hero (2001) will be launched on Tezos, a proof-of-stake blockchain that is considered to be more environmentally friendly and less energy intensive than others. She is slated to announce details of her inaugural NFT during a conversation with CIRCA Artistic Director, Josef O’Connor, at Art Basel on 18 June.

To find out more about Abramović’s recent explorations of the shape and form of heroism in our time, especially through NFTs, ARTnews spoke with the artist via email:

ARTnews: This upcoming week, you will be announcing details of your first ever NFT, The Hero (2001), during a live panel discussion at Art Basel in Basel. Why have you decided to explore this seemingly divisive, yet popular nascent technology? Additionally, how do NFTs relate to this specific performance art piece?

Marina Abramović: We never set out to create an NFT – it came as a surprise. The Hero was originally filmed in PAL (square format) so we did a lot of post-production work to fill out the screen in Piccadilly Circus with this beautiful landscape. It took months of editing each frame because I wanted the image to envelop the audience. I believe that ideas have to come as a surprise – frame by frame something new emerged from the stillness.

We discovered how the movement of the flag in the wind took on a new beauty and significance with each frame. No two frames were the same. The wind, the flag – they danced together, moving like a breathing organism. From one work, we are now giving birth to thousands of unique NFTs. This is very modern. This is a very Aquarian Age.

Earlier this year, in a Guardian interview, when asked about NFTs, you responded that while you loved everything new, with this medium, you did not see any good ideas or great content. At that time, you said that you only see everybody talking about the money they can make from NFTs and that you never made art for money. What changed your mind since then?

I filmed The Hero in 2001 when nobody had smartphones and social media didn’t exist. Twenty years later, we live in this new world and I find myself experimenting with how I could express this old work in a new medium. I asked myself how I could communicate with this younger generation who perhaps weren’t even alive when The Hero was first created. You have to consider the future when making art. Art must look forward.

I’ve been reading about Web3 and about what the new generation is doing within that space. It’s undoubtedly the future. I can barely type an email and they’re raising millions to help people and save the rainforest. They are heroes. They are pioneering in a way that is similar to how I was pushing boundaries in the ‘70s with my performance art. Everyone called me crazy. Very few people believed in what I was doing at the time.

Also, it is important to me that these NFTs were affordable and environmentally-friendly. The idea I’ve developed with CIRCA is a performance hosted on the Tezos blockchain. Like all of my previous performances, there is an element of risk involved and that risk centers around the audience. Experimenting means going into territory where you’ve never been, where failure is very possible. How can you know you’re going to succeed? Having the courage to face the unknown is so important. An artist should never stop taking risks, even when they are 75.

You explored the notion of heroes in The Hero (2001). Why did you choose to revisit this idea and focus on it at this point in time?

I believe that each work I create has many lives. The Hero (2001) was originally dedicated to my father who was a hero in the Second World War in Yugoslavia, so when Josef invited me to participate in CIRCA 2022, I immediately thought of this work.

Right now, we need hardcore images and the image of The Hero (2001) on the horse is a very strong image. (Because) right now, we are really facing the third world nuclear war. I mean, we are. I don’t think that anybody, apart from those who come from my part of the world, know how Putin works. He can’t be seen as weak. His ego is like Himalaya. He has the weapons that America doesn’t have and if they put him in the corner, he is going to use it because he doesn’t give a shit.

That’s a really huge danger where we are now. So this is the moment where we revisit this white horse, this white flag. We have beautiful land in front of us and it’s the hero who can save us. Only the hero can save us! Somebody who sacrifices everything.

Both the NFT and the three-month screening of The Hero in cities across the world present the highly evocative imagery of you sitting astride a white horse in a steadfast manner, wielding a flag, looking into the distance with a lofty gaze. Why did you choose to broadcast this visual to the world?

What’s most important to realise is that this is an image of a woman on a horse. Not a man on a horse. This image will appear every day around the world for three months. That in itself is radical. And you know, His Holiness the Dalai Lama once said that he is not going to reincarnate as a man, but as a woman. Finally! Because of this different type of energy.

I really believe that artists are servants of society who have a duty to communicate certain messages. During the Second World War, how many artists were showing the horrors? The reflections of reality? Throughout the four years of the entire war, from 1940 to1944, Matisse only painted flowers. To me, it’s amazing. The idea that actually he talked about beauty.

For CIRCA 2022, we’re presenting this image of a horse, his hair is in the wind. The flag is in the wind. There is this quiet landscape. The hero is ‘looking forward’ and I am reciting a new manifesto that I wrote here in India. There is something so positive in this work that I wanted to share with the world today. That’s the image that’s better than showing any horror.

How did it feel performing such a heroic ideal in The Hero at the beginning of the century? What do you hope viewers worldwide take away from your performance?

The world was very different in 2001 when I first filmed The Hero, directed by Jimena Blasquez Abascal. We travelled to Spain to the Montenmedio Contemporary Foundation, also known as NMAC Foundation. It was only a few weeks before 9/11 when everything changed. In hindsight, I wonder if perhaps this work captured that moment of stillness before the storm.

There is incredible power in stillness and I hope that this durational presentation inspires people all over the world to pause and reconsider heroism. To think about how they themselves can act, even when it might seem hopeless. This is the basic idea. Right now we need heroes. Less artists but more heroes.

Speaking of the future, what kind of impact are you hoping to engender from your inaugural NFT drop?

Instead of donating a percentage of the money to charity, I will award grants to a group of people who are working within this new space and whom I believe in. If we succeed in building this new community, I’m excited to see what possibilities might emerge later.

I think the next step is to look even deeper. It is about finding solutions to the ongoing catastrophe and who can bring the solution? The heroes. The ones who sacrifice everything. The ones who bring the new light to illuminate this world. If I was starting out today, this is what I would be doing. What Nadya Tolokonnikova achieved in March – raising $6.7 million for Ukraine relief efforts – it’s incredible.

I want to see what other ideas people have in this Web3 space to help save the planet. The grants we will award from The Hero NFT project is my small way of contributing to this future.