In the clip, which can be seen below, DEF LEPPARD singer Joe Elliott says: “We have just finished the wettest gig we have done since Mannheim in 1986. It rained all night long. But the crowd stuck with us. Nobody left. Nobody moaned. And one down, 35 to go. And next up, Miami. But Atlanta, Georgia — thank you. Fantastic.”

He adds: “Everybody that was there tonight, thank you for staying with us right to the end of the gig, because it was insanely wet.”

Guitarist Phil Collen says: “Just got off stage. First stadium gig in God knows how long — three years or whatever it is. Amazing. Everything that could have gone wrong did. We had kind of like a hurricane, storm — whatever that was — coming through. And [we were] just drenched. The drums went off at one point. We carried on like nothing had happened. And we played the new songs, and they were great — they just slotted straight in, like any of the classics.”

DEF LEPPARD‘s set included some of the band’s biggest hits, such as “Pour Some Sugar On Me”, “Photograph” and “Rock Of Ages” — as well as songs from the group’s latest album, “Diamond Star Halos”, including “Kick” and “Fire It Up”.

The setlist was as follows:

DEF LEPPARD‘s long-delayed North American trek with MÖTLEY CRÜE, POISON and JOAN JETT & THE BLACKHEARTS was originally planned for 2020 and later moved to 2021 and then to 2022. “The Stadium Tour” will conclude on September 9 in Las Vegas, Nevada.

“The Stadium Tour” marks the CRÜE‘s first live dates since wrapping its 2014/2015 farewell tour. CRÜE toured with POISON back in 2011 and DEF LEPPARD teamed up with POISON for a string of road dates in 2017, but this jaunt marks the first time all four acts have hit the road together for an extended tour.

In May 2021, DEF LEPPARD drummer Rick Allen told “Trunk Nation With Eddie Trunk” that promoters “made the right decision” by postponing “The Stadium Tour” for a second time. “I think the primary focus has gotta be people’s health and well-being,” he said. “So I understand why they made that decision. I think if we had gone out [in 2021], it may have been a bit more of a patchwork of a tour as opposed to being able to play the whole thing from start to finish. So, it’s a bummer, but here we are.”

Allen went on to say that he and his DEF LEPPARD bandmates were disappointed that they wouldn’t be able to perform live again in the U.S. until 2022. “We’re really bummed, ’cause, obviously, we wanted to get out there,” he said. “It’s been a long time. And I know — our fans are so loyal. It’s incredible. The fact that we got the largest vote for the [Rock And Roll] Hall Of Fame — the fan vote. So our fans are just particularly special; I mean, they’ve always been a rock. So I feel for them. And I feel for us. But I just want people to come out and be safe.”

Last July, MÖTLEY CRÜE bassist Nikki Sixx told the 95.5 KLOS radio station that his band and DEF LEPPARD “might even drag” the same tour “to Europe, South America, Japan,” but he cautioned, “We don’t know yet. Right now it’s a little far off. But us and DEF LEPPARD are super close; that’s great. And we’ll just see what version of ‘The Stadium Tour’ might fit for other countries, if we decide to go. Maybe it’ll be the same lineup. I know people are super stoked for the lineup. It’s a good outdoor fun party evening.” 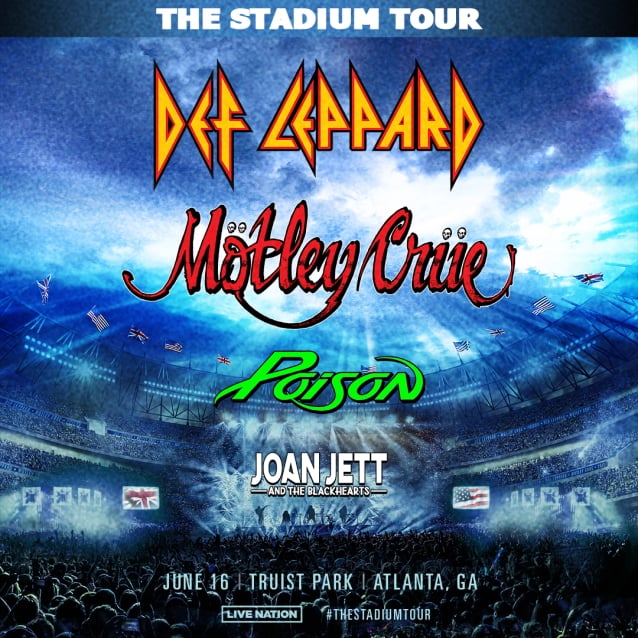