TEHRAN, Iran (AP) — Two members of the paramilitary Revolutionary Guard’s aerospace division died as “martyrs” in Iran in separate incidents over the weekend, Iranian media reported on Monday. The term is typically a designation given to those on important assignments.

The deaths of the two men come as tensions remain high over Iran’s tattered nuclear deal with world powers, and its uranium enrichment program that is now the closest it has ever been to weapons-grade levels. While authorities offered no suggestion of foul play in the men’s deaths, Israel has been accused of killing other high-ranking Guard members amid the growing crisis.

The semiofficial Fars and Tasnim news agencies, believed to be close to the Guard, identified one of the dead as Ali Kamani and said he died in Iran’s central city of Khomein. Tasnim said that Kamani died in a “car accident,” without elaborating.

The news agencies did not give a rank for Kamani. However, a photo published by Tasnim showed the man wearing the epaulets of a second lieutenant in the Guard’s aerospace program, which runs Iran’s ballistic missile program as well as some of the country’s air defenses.

Khomein, the birthplace of the Grand Ayatollah Ruhollah Khomeini who led the 1979 Islamic Revolution, is in the province of Markazi. That province is also home to Iran’s Arak heavy water reactor, a key nuclear program site that has air defenses around it.

Fars alone reported on the death of the second man, whom it identified as Mohammad Abdous. The agency published a picture of Abdous in civilian clothes at the Imam Reza Shrine in the city of Mashhad, Iran. 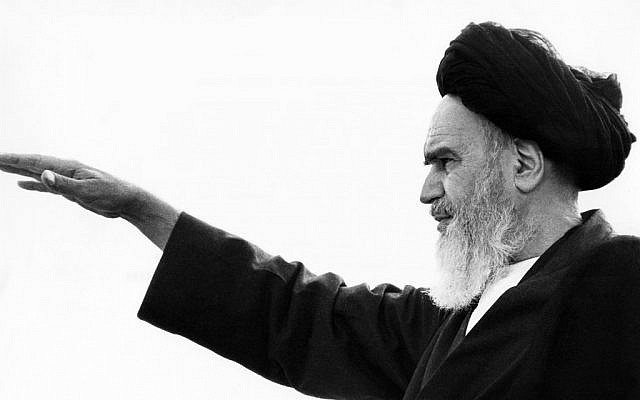 In this photo taken on September 26, 1980, the late founder of the Islamic Revolution Ayatollah Ruhollah Khomeini salutes his followers in the Iranian capital of Tehran. (Stig Nillson/AFP)

Fars said that Abdous died “on a mission” while working in Iran’s Semnan province. Rural Semnan province, east of Tehran, is home to the Imam Khomeini Spaceport, which has been used in satellite launches.

The report of the two men’s deaths come about a week and half after the reported death of Guard Col. Ali Esmailzadeh, a member of its expeditionary Quds Force, under unclear circumstances.

In May, two gunmen on a motorcycle shot and killed Guard Col. Hassan Sayyad Khodaei in Tehran. There has been no claim of responsibility for the attack. Iranian officials have blamed “global arrogance” — code for the United States and Israel — for Khodaei’s killing.

The 50-year-old Khodaei remains a shadowy figure and Iran has yet to offer biographic detail beyond saying that he also was a member of the elite Quds Force. The Guard has described him as “defender of the shrine” — a reference to Iranians who support militias fighting the extremist Islamic State group in Syria and Iraq. Thousands attended his funeral in Tehran and hard-line President Ebrahim Raisi visited his family.

The manner of the slaying evoked previous targeted attacks by Israel in Iran. In November 2020, a top Iranian military nuclear scientist, Mohsen Fakhrizadeh, was killed by a remote-controlled machine gun while traveling in a car outside Tehran.