Updates to beloved gadgets can go one of two ways. Either a company tries to fix what ain’t broke or builds upon a great foundation to create an even better product. For fans of the popular Garmin Forerunner 245, I’m happy to say that the new $349.99 Forerunner 255S is the latter. The result is a midrange running watch that punches far above its weight.

Besides some refreshed colorways, the Forerunner 255 lineup looks nearly identical to its predecessor. These aren’t the sleekest wearables on the market, but they’re not a crime against fashion either. If you go for a more muted color, these can easily transition from everyday life to the gym. The notable change here is that Garmin now offers four versions of the watch instead of two. I reviewed the smaller 255S, which has a 41mm case and weighs 39 grams. If you have larger wrists, there’s also a 46mm version that weighs 49 grams. That’s roughly the same as an Apple Watch and much lighter than flagship GPS watches like the Polar Grit X Pro (79g) or the Coros Vertix 2 (89g). Each size also has a “Music” version if you want onboard music storage. 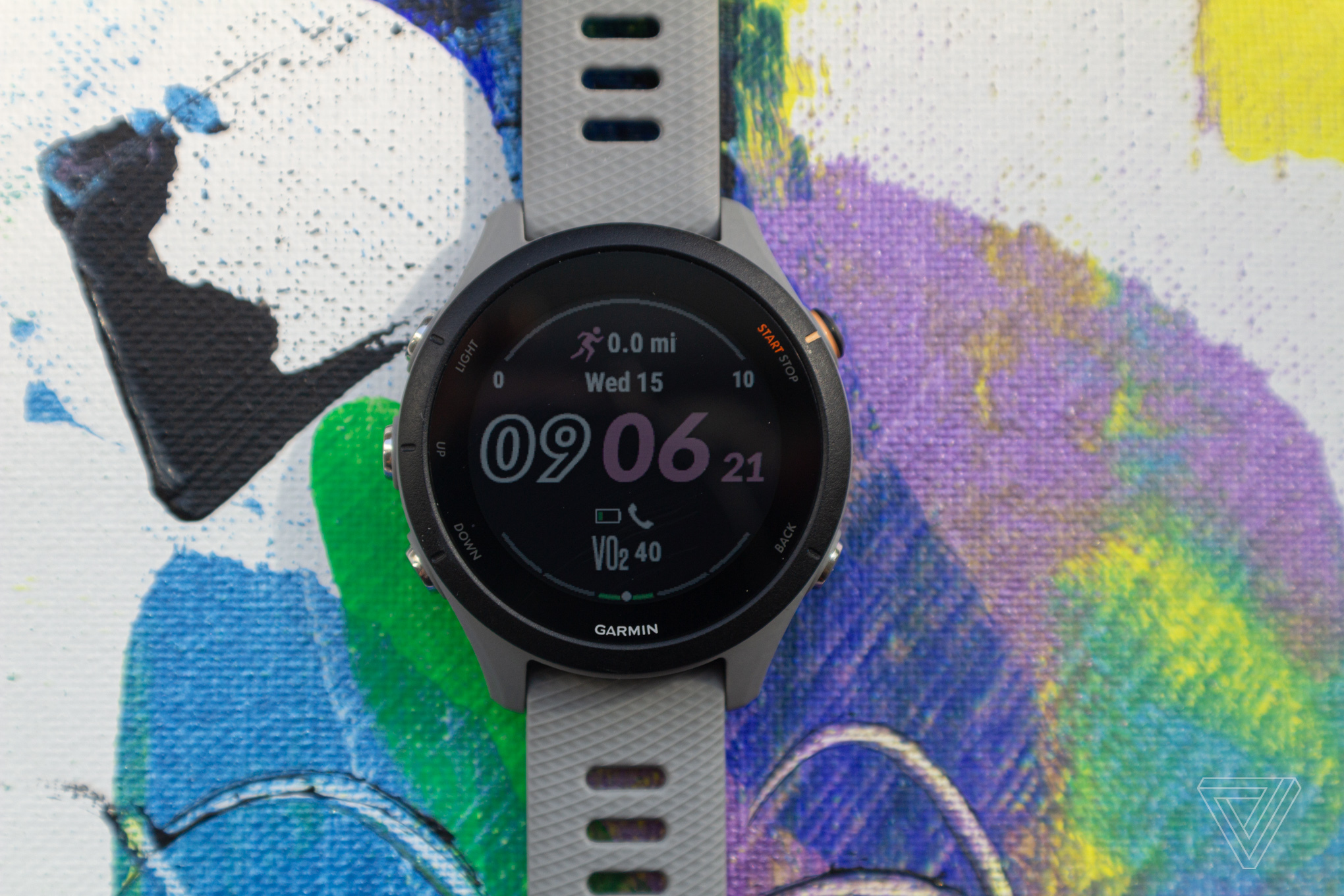 I deeply appreciate that Garmin puts in the effort so people of all sizes can use their devices. For me, the smaller Forerunner 255S is the perfect size and weight for my wrists. In the three weeks I tested the 255S, it never once got caught on my sleeves, and I never noticed its weight during a workout. After testing some truly chunky multisport GPS watches over the years, it feels so good that I don’t have to compromise between useful training tools and comfort.

With the Forerunner 255 series, it’s less about big updates than it is about a bunch of little ones that improve upon the core experience. For starters, the Forerunner 255 offers a better heart rate sensor, adds a barometric altimeter and compass, multiband GPS, and an NFC chip for contactless payments. These might not seem like much, but it’s been three years since the Forerunner 245. That’s a long time for wearable tech. For example, NFC was less common on midrange watches back then but is considered a fairly standard feature now. Is Garmin Pay the best of the mobile payment options on smartwatches? Not really, but it works and opens up more opportunities to leave your wallet at home. Likewise, heart rate sensors have leveled up in this timespan as well. These are all savvy upgrades that’ll help futureproof the 255S.

Battery life has also been slightly improved to an estimated 12 days on a single charge. I’ve only had to charge the Forerunner 255S once in 25 days of use with roughly 30 minutes of GPS activity per day. And as of this writing, I’ve still got 15 percent left. It helps that the 255S uses a memory-in-pixel display for better visibility in direct sunlight instead of a power-guzzling OLED. It’s a prudent choice here, as this is a watch aimed at outdoor runners and clearly prioritizes battery life over fancier features like a vibrant touchscreen. Aside from NFC payments, you’re not going to get more than the basic smart features like alarms, timers, push notifications, media controls, calendar events, and weather. Android users can respond to texts or reject calls, but that’s about it.

Of all these updates, multiband GPS is the big one. In a nutshell, multiband GPS (also known as dual-frequency GPS) allows a watch to access more than one major satellite system at the same time. The benefit is you’ll get better accuracy in challenging environments. As you might imagine, it’s an attractive feature for intrepid hikers, trail runners, and cyclists.

But it’s actually kind of bonkers to find multiband GPS at this price. Not only is it a fairly new feature to the space, but it’s also typically found on premium fitness watches. The Coros Vertix 2 was the first to introduce it last year and costs a whopping $699. Garmin also introduced these features on its flagship Fenix 7 series, which starts at $699.99, and the $899.99 Epix 2. So really, you’re getting an advanced navigational feature in a watch that costs hundreds less.

To test the feature, I turned on the multiband GPS setting on the Forerunner 255S while simultaneously recording runs with the Apple Watch Series 7 and the Runkeeper app on my phone. You’ll always find differences when testing multiple devices this way, but the Forerunner 255S was consistently spot on with local routes I mapped on Komoot. For instance, on a 2.85-mile route, the Forerunner 255S logged 2.86 miles. My phone registered 2.84 miles, while the 2.81 miles on the Series 7. These discrepancies might be a bigger issue if you’re running ultra-long distances, but for most people, it’s more than accurate enough.

The Forerunner 255S wasn’t as fast at picking up a signal as the Fenix 7S Sapphire Solar I tested earlier this year, but it wasn’t too far off either. Compared to the similarly priced Polar Pacer Pro, I was regularly able to start a run more quickly. If multiband GPS is something you want, the Forerunner 255 watches are a steal.

The 255S is also capable of monitoring other metrics. Heart rate tracking was also on par with the Series 7 and my Polar H10 chest strap, usually staying within 3-5 beats per minute. Sleep tracking also largely corresponded with my Oura Ring, though it wasn’t as sensitive in tracking all those times the pesky cat woke me up during the night. In general, Garmin’s sleep tracking isn’t the place to go for in-depth sleep quality insights. It’s much more simplistic than what you’ll find on a Fitbit or the Oura Ring, and if you’re looking for recovery insights, Garmin has several other metrics that are more helpful, like Body Battery and Training Load.

That’s because, at the end of the day, the Forerunner 255S isn’t a health wearable in the way the Oura Ring and Apple Watch are. It’s for training, and specifically, it best suits runners. With the 255S, you get two new racing widgets, as well as Garmin’s Morning report feature. The Racing Calendar widget lets you see a list of your upcoming events, your predicted finish time, and what weather you can expect on race day. Meanwhile, the Race widget automatically generates daily workout suggestions based on your personal training needs. The Morning Report pops up on the watch first thing each morning and gives you a summary of your sleep, the weather, and some of your recovery metrics.

Altogether, these are helpful tools for runners — though triathletes can also benefit now that Garmin’s added the triathlete activity to the Forerunner 255 lineup. (Meaning, you can easily switch between running, swimming, and cycling in a single workout.) I’m currently training for a 10K, so the Racing Widget and daily workout suggestions have been helpful in demystifying what I should be doing on a given day. My only beef is that, as with many Garmin features, the user interface is confusing, especially when the watch tracks so many metrics. The racing widgets don’t come preloaded. You have to add them yourself. It’s also not always apparent when you ought to press a button to access submenus, so you kind of have to poke your way around until you find what you want.

My only beef is that, as with many Garmin features, the user interface is confusing

I can’t say I’m surprised. This is typical of Garmin’s watches that use its traditional five-button menu navigation. Garmin veterans are probably used to the drill, but it’s daunting for newcomers, especially if you’re coming from a different platform or a touchscreen watch. Garmin’s recently started including touchscreen and button navigation on its more premium watches, so hopefully we’ll see that trickle down to more affordable models in the future.

I can’t get into every single little metric the Forerunner 255S tracks. There are simply too many, and we’d be here all day. The one I do wish I could talk about is the new HRV status metric. Unfortunately, I can’t. HRV status is supposed to measure your heart rate variability — a metric that gives insight into your recovery — during sleep and compare it to a three-week baseline. The more often you wear the device to sleep, the more accurate it becomes. I’d like to tell you how well it works, but I never got to try it out. That’s because it takes a long time to even show up. The app says you need to wear it nightly for about three weeks before you see any data. I’ve done that. Nada.

I reached out to Garmin to see if it was just my unit, but spokesperson Stephanie Schultz said it could take up to four weeks to begin populating. It’s possible that my unit is taking longer than average because there were a few nights I forgot to wear it to bed. I understand the concept of building a baseline over time and how that’s better for accuracy. The Oura Ring and Whoop also require you to build baselines over a period of time. That said, it usually doesn’t take nearly a month. This isn’t necessarily a dealbreaker, however, because accuracy trumps impatience at the end of the day. Plus, as I mentioned, Garmin has no shortage of recovery metrics. I just would’ve appreciated these extra insights going into my 10K this weekend. By the time the data starts popping up, my 10K will have come and gone.

The 255S is perfectly suited for my needs, and I didn’t feel like I was deprived of useful training insights and metrics

But a less-than-intuitive interface and erring on the side of accuracy are small potatoes. I loved using the Garmin Fenix 7S Sapphire Solar, but I had an excellent experience using the Forerunner 255S, too. The 255S is perfectly suited for my needs, and I didn’t feel like I was deprived of useful training insights and metrics. The only feature I really missed from the Fenix 7 series was real-time stamina monitoring. That said, I wouldn’t pay double the price just to get it.

Long story short, I’d highly recommend this to anyone looking for a comfortable, no-frills, long-lasting GPS watch that won’t break the bank. It is $50 more than its predecessor; you have to factor in that you’re getting multiband GPS at a bargain. And while this watch prioritizes runners, the fact that it’s added triathlete support also makes it a compelling alternative for folks who want a multisport watch on a budget. The Forerunner 255S may not be the flashiest Garmin device you can buy, but it’s the one that will get you the most bang for your buck.

Photography by Victoria Song / The Verge