So, last December, Brandon Inniss slid into Carnell Tate’s private messages on Instagram and began recruiting him to play for the South Florida Express. It didn’t matter to Inniss if playing alongside Tate could affect where the two five-star 2023 recruits ended up in the national rankings.

This was about teaming up to win, and Inniss and Tate did a lot of it over the past six months, wrapping up the seven-on-seven circuit two weekends ago with a national championship at the Overtime invitational in Las Vegas.

“To have Carnell on the same field with me is great because not only do I have another good person I can compete with every day, but it also makes defensive coordinators focus on someone other than me,” Inniss told The Athletic on Monday, about an hour before Tate announced he was committing to Ohio State over offers from Notre Dame, LSU and Tennessee.

“I can definitely see us playing together (at the next level),” Inniss continued. “We saw it this past seven-on-seven season with SFE. We were saying, ‘Just imagine us in college — that’s something to look out for.’”

This one for the city🥂 pic.twitter.com/NUU22zp1sc

Ohio State fans certainly will. The talented receiver duo — ranked Nos. 2 and 3, respectively, at their position in the 247Sports Composite rankings — have become great friends since meeting on Ohio State’s campus a year ago at a football camp. They speak on FaceTime frequently, Innis said.

Inniss, who plays at Plantation American Heritage in Fort Lauderdale, hinted Monday his college commitment could come soon. His only other official visit was to Alabama.

“I went to Ohio State two times before (my official visit last weekend). So I’ve seen everything from a football standpoint,” said Inniss, who previously took an unofficial visit to Ohio State with Tate in early April. “What I liked most at Ohio State this past weekend was the players didn’t treat me like a recruit. They treated me like I was part of the team already the two nights I was there. That was the highlight of the visit.”

Monday, though, the news was about Tate, who will become the 12th top-100-ranked receiver Brian Hartline has landed since 2019 and the fifth five-star prospect if he signs as expected in December.

Tate spoke with The Athletic at the Overtime tournament two weeks ago when he had already made up his mind about where he was going to school. He outlined why the Buckeyes won out.

“What’s important is player development,” Tate said. “Hartline, what he has done for his receivers, you see Chris (Olave) and Garrett (Wilson) became first-round picks back to back (in April’s NFL Draft). That stands out for me as well as their receiver-friendly offense. They always have multiple great receivers coming out of Ohio State. I would love to be the next one. Plus, coach (Ryan) Day’s play calling — he gets his receivers the ball.”

Earlier this month, Day was outspoken about how much NIL money is needed to keep a roster intact. He estimated it costs about $13 million. Asked where NIL ranked in his decision-making process, Tate said it was low.

“It hasn’t mixed up the thought process for me at all,” Tate said. “Because I know the big bucks come at the end when you go to the league. I don’t think NIL money can touch the league money as of right now. I know that picking money over development won’t get you into the right spot. Because the NIL money doesn’t help you get to the league.”

Front Office Sports reported Ohio State ranks No. 1 in NIL deals signed and the number of athletes with at least one NIL deal.

Ohio State athletes have surpassed 1,000 NIL deals in year one, per @OSUNIL_ 📈

The Buckeyes have ranked 1st in:

Tate got his first scholarship offer after his freshman year at Marist High in Chicago; he caught 28 passes for 444 yards and five touchdowns over the final eight games that season. The offer came from Philadelphia Eagles receivers coach Aaron Moorehead, who was an assistant at Vanderbilt at the time. Tate ended up with more than 40 offers by the end of his junior year.

“It was crazy,” Tate said. “I never thought I’d get an SEC offer as a freshman. I didn’t get moved up to varsity until after four games.

“Now, there’s a lot of expectations I have to live up to.”

Tate, who grew up on the west side of Chicago in the neighborhood of East Garfield Park, started playing football after his grandmother, Kim Tate, signed him up at a young age. Tate said his grandmother helped raise him after his parents separated when he was young, taking him to activities such as basketball, ice skating, rock climbing and to the local Boys & Girls Club.

“She did a lot for me,” Tate said. “I wasn’t necessarily hanging out on the streets. I was always around her, day and night. Whenever my parents were bugging me, I would always call her, and she’d get on my parents about it. She was my best friend. She took me wherever I wanted to go — me and my little cousins. With football, she didn’t want me sitting around the house doing nothing. So she took me to the park and got me involved. She just wanted me to go do something.”

Tate said his grandmother died from lung cancer when he was in middle school.

“It definitely broke me,” he said. “But she inspired me to work hard. She always worked hard in what she did, whether she liked it or not. I took that and ran with it and always gave 100 percent effort whether I liked what I was doing or not.”

Tate said growing up in Chicago was “definitely rough.” He lived back and forth between his parents, who moved four or five times. Tate said football helped keep him busy, but the violence in Chicago was always near.

“I have friends in jail right now facing murder charges,” Tate said. “I’ve had other friends who were murdered.”

This summer, Tate is interning at a law firm in Chicago, where he’s learning about zoning. He’s often assigned to go to city hall for permits, and becoming a lawyer after his football career is intriguing to him.

“Working in law earns you big bucks,” Tate said. “You also don’t have to rely on someone else to work for you when you’ve got an issue with the government.”

5-star WR ⁦@carnelltate_⁩ made this ridiculous catch along the sideline. But they ruled him out. I don’t know ⁦@SouthFLExpress⁩ #OT7 pic.twitter.com/VanT10R3Je

Making it to the NFL, though, is all he’s focused on right now. After not being able to play his sophomore season at Marist because of the pandemic, Tate left home and enrolled at Bradenton (Fla.) IMG Academy.

Being in Columbus, Ohio, for college — a five-plus-hour drive or short flight from Chicago — makes life easier than living in Baton Rouge or Knoxville. 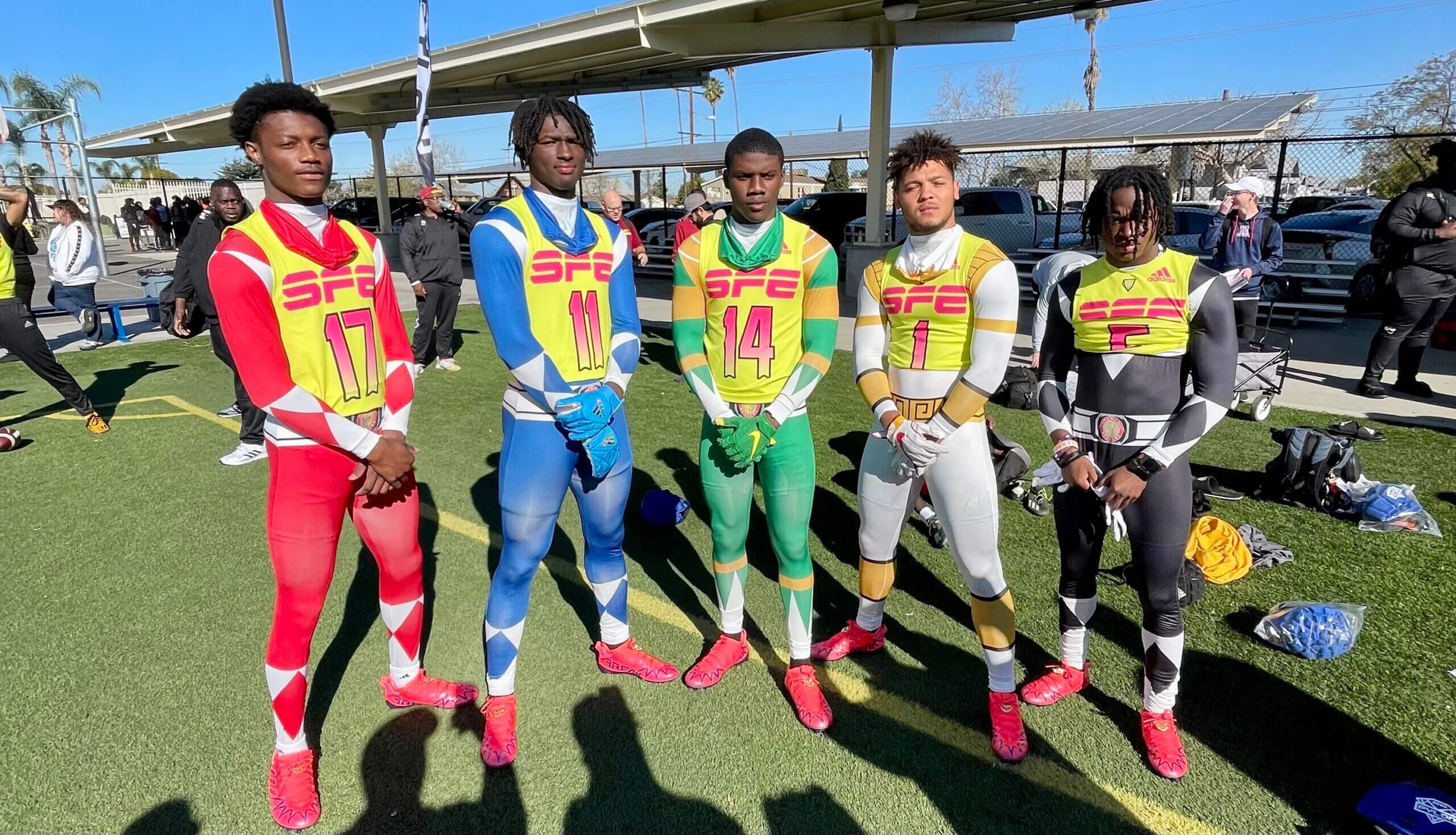 Hooking up with the South Florida Express seven-on-seven team in January eventually made life in Florida a little easier for Tate. Playing with Inniss and developing that friendship could result in the Buckeyes landing two of the best high school receivers in the country who already have chemistry together on the field.

“Carnell, to me, is like a Marvin Harrison type,” SFE general manager Ricky Williams said. “He’s got deceptive speed. You don’t think he’s fast, but he’s really moving. He’s a great route runner. I think in the future, he needs to concentrate a little more on his catches. Sometimes he might drop an easy one but come back and catch a hard one.

“I think the only school that keeps Brandon from playing with Carnell at Ohio State is Alabama. But ultimately, I think they’re going to end up at Ohio State together. Brandon will play in the slot and Carnell on the outside. And they’ll be dangerous.”