Duncan Hannah, an American painter known for his depictions of idyllic landscapes and portraits inspired by adventure stories and classic films, has died, according to the Paris Review, which has published his work. He died of a heart attack at 70 years old at his home in West Cornwall, Connecticut on June 11.

An outlier among his peers, Hannah focused on figurative painting during a time when the New York art scene was embracing alternative mediums such as conceptual photography and sculpture. During the 1970s and ’80s, alongside figures like Keith Haring and Kenny Scharf, Hannah helped breathe new life into his medium of choice. He did so with a level of earnestness that was rare at the time. 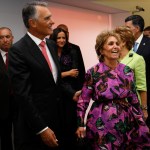 In 1980, Hannah’s work was included in the seminal exhibition “The Times Square Show,” organized by New York artists’ group Colab (or Collaborative Projects, Inc) in a shuttered massage parlor. Notable participants included Jean-Michel Basquiat, David Hammons, Haring, Jenny Holzer, Alex Katz, Scharf, and Kiki Smith. For many of the artists, the show offered some of their first major recognition.

Despite being a part of an emergent art crowd, Hannah sought to distance himself from that sector of New York’s social scene.

“I’ve basically ignored the avant-garde,” Hannah reflected in a 2018 profile in the Paris Review. “I was surprised by the conformity of the art world. Because I always thought from afar that it was a bunch of eccentrics who couldn’t really agree on anything and were marching to their own drummers. But there was a rigidity to it that really kind of baffled me.”

Hannah’s work also later figured the exhibition “New York/New Wave” (1981) at MoMA PS1, which documented the intersections between Downtown New York’s art and music scenes. The show, which helped launch the careers of Basquiat and others, is now considered an important one.

Born in Minneapolis, Minnesota, in 1952, Hannah attended Bard College in Annandale-on-Hudson, New York, as an undergraduate before graduating from the Parsons School of Design in New York in 1975. During that time, he developed a figurative style influenced by painters such as Edward Hopper and Fairfield Porter.

Hannah’s journals of the 1970s were published as two books, Twentieth-Century Boy: Notebooks of the Seventies (2018) and Dive (2021), both of which capture New York’s punk scene. In their pages are recollections of a bohemian lifestyle filled with sex and drugs, along with anecdotes about figures in the scene like Andy Warhol, Patti Smith, David Bowie, and Lou Reed.

Hannah received a Guggenheim Fellowship in 2011. His work was the subject of solo shows at storied galleries such as Tibor de Nagy and Phyllis Kind, and is currently included the permanent collections of the Metropolitan Museum of Art in New York, the Whitney Museum in New York, and the Minneapolis Art Institute in Minnesota.

Even though painting went in and out of favor during his career, Hannah stuck to his medium and his nostalgic imagery regardless of what else was in vogue.

On his process, which involved hunting down long-forgotten foreign films, Hannah remarked to the New York Times, “There’s a certain kind of flared nostril that always gets to me. I’ll think, ‘Who’s that?’ and then go to work.”